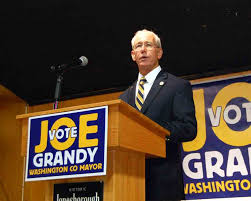 Washington County Tennessee Mayor Joe Grandy, who is running for re-election in Thursday’s County Mayoral race is considering filing a lawsuit against his challenger James Reeves. Mayor Grandy denies an accusation from Reeves who says Grandy supports beer sales at the Appalachian Fair. Grandy says in a release he has nothing to do with beer permits or applications. Grandy says he has never been involved in trying to bring alcohol sales to the Appy Fairgrounds and would have never offered his support for it. Mayor Grandy ends the statement by saying Reeves is making it up to deceive evangelical Christians into voting for Reeves. Grandy is considering a libel lawsuit in consultation with his attorney.