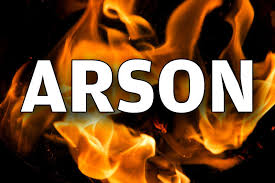 A Johnson City man is jailed and scheduled for arraignment after he attempted to set a house on fire with three juveniles and an adult inside, following a domestic argument with his girlfriend. Police responded to the 13 hundred block of Spruce Street, where they found 24 year old Anthony M. Myers arguing with his girlfriend. Myers retrieved a gas can and poured gasoline on the outside of the home. Myers then picked up a lighter, his girlfriend tried to take it from him and a struggle ensued . During the struggle, Myers’ girlfriend sustained minor cuts to her arm and hand. Myers was then arrested and charged with Attempted Aggravated Arson, Simple Domestic Assault, and five counts of Reckless Endangerment.