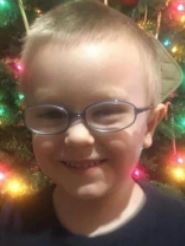 A Norton, Virginia man who police said fled the city following a domestic fight has been indicted for the murder of his 4-year-old son.

Roberts, 40, is also facing counts of domestic violence and aggravated malicious wounding based on the Apr. 22 incident. His wife Shanta was also injured. 4-year-old Jacob Nathaniel Roberts died as a result of his injuries.

Roberts was brought back to Wise County earlier this month after he waived extradition following his arrest in Kentucky on unrelated charges.