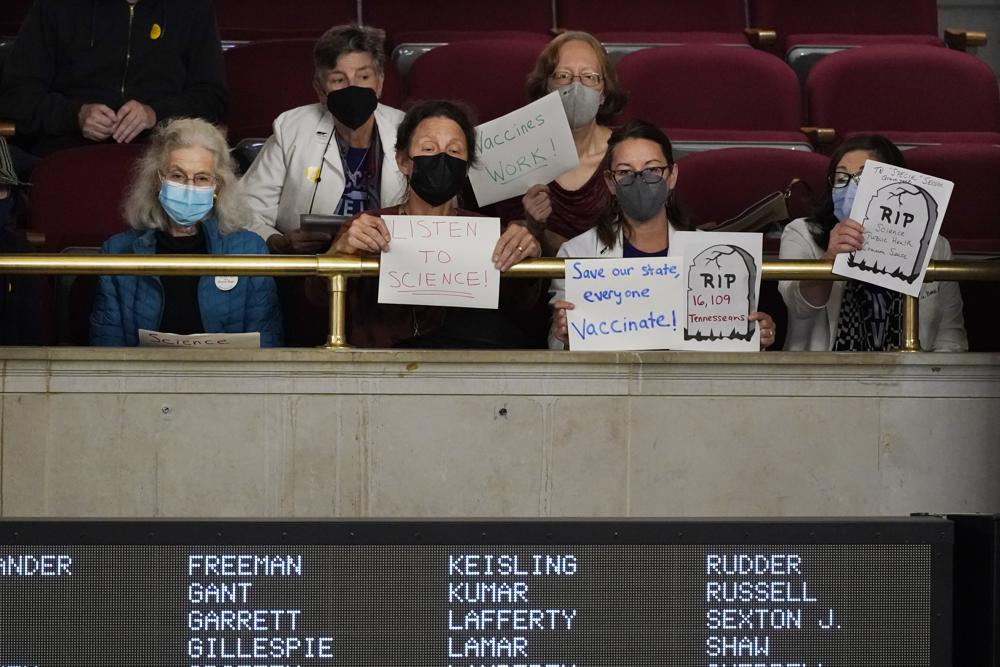 Tennessee Gov. Bill Lee’s office warned lawmakers that their sprawling bill limiting COVID-19 restrictions would violate federal law that protects people with disabilities and put the state at risk of losing federal funds, according to records obtained by The Associated Press.

The Republican-controlled Legislature ignored the advice and passed the bill anyway. Less than two weeks later, the Republican governor signed it into law.

Lee, who is up for reelection next year, has since said there are still “some issues we need to work through.” He has publicly mentioned concerns about how the law changes hospital visitation rules and what it may mean for the state’s ability to control its own workplace regulation going forward. But the governor has expressed no concern publicly about compliance with the Americans with Disabilities Act.

Privately, his legislative counsel warned lawmakers explicitly on the night the bill was passed that they were running afoul of federal law. The warning came in an email from Legislative Counsel Liz Alvey at 12:44 a.m. on Oct. 30 to Senate Speaker Randy McNally’s chief of staff, Rick Nicholson, and Luke Gustafson in Senate Majority Leader Jack Johnson’s office. The email referenced an earlier effort by the governor’s office to flag the same issue.

“Proposed ADA accommodation in the bill is a violation of the ADA and will put us at risk of losing federal funding,” Alvey warned as a flurry of last-minute changes were being debated and added.

The final bill was approved about an hour later that morning.

It’s not clear when or if she gave that legal advice to the governor, who receives more legal guidance from his team before deciding whether or not to sign legislation. Lee’s office did not directly address that question in its comments.

“The governor noted there were items that need to be fixed in the upcoming session, and we will be working with lawmakers,” Lee’s spokesman Casey Black responded in an email when The AP asked why Lee enacted the legislation, citing the email in which his counsel had warned that it would violate federal law. “On balance, the bill is a response to the federal government’s vast overreach.”

The law was almost immediately challenged in federal court, where families of young students with disabilities argued that their children are put at risk of serious harm when schools aren’t allowed to require masks when people gather indoors, where chances of infection are much greater.

U.S. District Judge Waverly D. Crenshaw, who is overseeing the legal battle, has since halted the prohibition against school mask mandates from being implemented and has specifically instructed the state’s attorneys to explain how the new law complies with the ADA.

Crenshaw is scheduled to hear evidence in the case Friday morning. State Attorney General Herbert Slatery’s office, representing Lee and his education commissioner, is now tasked with defending the way the law accommodates students with disabilities.

Republican legislative leaders, who called the three-day sprint session against COVID-19 mandates after the governor declined to do so, have lauded the final product despite objections from prominent business interests, school leaders and others.

The Senate speaker’s office expressed no concerns about how the law accommodates people with disabilities, and downplayed the legal concerns raised by the governor’s office.

McNally “does not agree with this particular objection and supports the law the governor signed,” said McNally’s spokesperson, Adam Kleinheider.

Under the law, families can request accommodations for their children with disabilities to have “an in-person educational setting in which other persons who may place or otherwise locate themselves within six feet (6′) of the person receiving the reasonable accommodation for longer than fifteen (15) minutes are wearing a face covering provided by the school.”

“The legislature obviously was simply ignoring whether or not the law they passed would actually pass legal muster,” Democratic Senate Minority Leader Jeff Yarbro told the AP. “And it’s shocking to me that the governor would sign this bill into law knowing full well that significant portions of it are illegal.”

When the state enacted the new law, it was already under court orders blocking a policy by the governor to loosen school mask mandates. That executive order was upended when three federal judges ruled to block the parental mask opt-out option for students in three counties, siding with disabled children who sued under the Americans with Disabilities Act. Lee let the opt-out order expire when he signed the new law.

“The legislation provides for parental choice regarding whether or not their children should wear a mask, while accommodating those who have special needs,” said Senate Majority Leader Jack Johnson in a statement on Crenshaw’s ruling.

The new Tennessee law largely bars governments and businesses from requiring proof of COVID-19 vaccinations, and lets schools and other public entities require masks only in rare, dire public health situations. Exemptions also are allowed if groups can show they would lose federal funding by complying with the state law, which conflicts with policies implemented by President Joe Biden’s administration.

Masks are a key virus-prevention tool that are most effective when worn by a large number of people, public health experts say. The CDC has again recommended them for enclosed public spaces including schools, saying they don’t pose health risks for children older than toddler age.

Before Lee made Alvey his top legal advisor, she worked since 1999 with the Tennessee Senate, where she was the previous majority leader’s senior policy advisor and held leadership positions in the Southern Legislative Conference and the Council of State Governments.

IMAGE: People holding signs in support of COVID-19 vaccinations sit in the gallery of the House Chamber, Wednesday, Oct. 27, 2021, in Nashville, Tenn. Tennessee’s General Assembly is meeting for a special legislative session to address COVID-19 measures after Republican Gov. Bill Lee declined to do so. (AP Photo/Mark Humphrey)